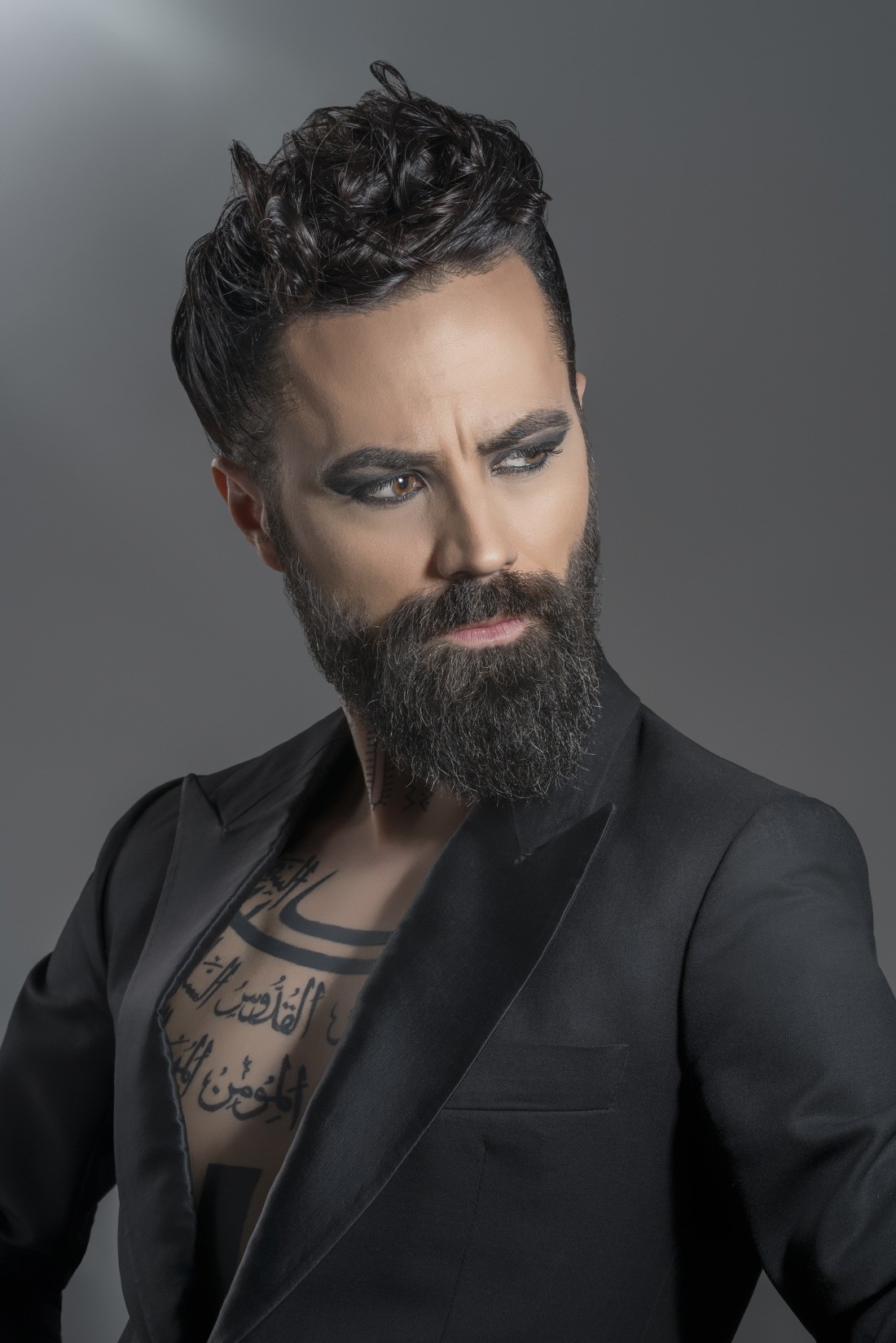 Božo Vrećo is often referred to as Bosnian Conchita Wurst. But the Bosnian musician doesn’t just wear a beard and clothes – he wants to save old love song traditions.

At “Franz & Sophie”, situated in a side street in Sarajevo, friends of organic teas, artists and intellectuals of the city meet. They are rather colourful people, and the innovator of the Bosnian love song sits in the middle of it all in black. Božo Vrećo wears a black hat to a black shirt and black trousers, black is the beard and the hair tied to the ponytail, black is the painted edges under the eyes and the tattoos that decorate the body from the hands to the neck. “It’s the black of the Balkan women,” says Vrećo and sends a cheerful, youthful laugh behind.

Women’s clothes and a full beard have always been a trademark of the 35-year-old singer, who likes to describe his voice as velvety soft and clear as a bell. Often enough he has been compared to Conchita Wurst from Austria. Božo Vrećo, with all due respect, prefers to emphasize the differences that lie beyond the outward appearance, above all, in the fact that he does not see himself as an artificial figure and stage-manages himself, but only “follows his nature” and sings “traditional songs”.

He is a free spirit who does not want to be classified and not be captured – not by a clearly defined gender, not by a clearly defined ethnic affiliation. “I am a man and a woman in the same body, a tenor and a soprano,” he says. What’s more, he lives as a Bosnian Serb from Foča today in the capital Sarajevo, which is by no means a matter of course even almost 25 years after the end of the war. And there he has specialised in those folkloric love songs that are cultivated above all in the Bosniak, Muslim tradition there.

Sevdalinka is the name of the genre or Sevdah. The name is derived from the Turkish word for love or from Arabic, where sawda means “black bile”. Both are fitting because Sevdah stands for love songs that are sad as death and terribly bitter. They are songs about lost and unrequited love. The roots of this music, mostly performed with accordion, lie in the 15th century. Ottoman and Slavic traditions merge. Sevdalinka is for Bosnia what Fado is for Portugal and Blues is for the blacks in America – heavy-blooded, melancholic and extremely popular.

Božo Vrećo has known the songs since childhood. His mother, an artist whom he likes to call his “muse”, heard them on the radio. Before he came to music himself, however, he completed his archaeological studies in Belgrade. There, where he “experienced and survived disappointments”, he deepened his love for love songs. “There is a similarity between archaeology and this music,” he says. “It’s about a search in the past. You have to travel through time”.

For the sake of Sevdah, he not only travelled through time but also moved from Belgrade to Sarajevo, to the source of the songs. As an autodidact, he immersed himself in music. “I learned from the greatest,” he announces. He had his first performance in a very small, very old café in the old town of Sarajevo. Today he is working on his sixth album and touring all over the world. Through the USA last year, through Australia this spring, in September he will also perform at Gasteig in Munich. “People don’t understand the lyrics,” he says, “but they understand the emotion – and the music isn’t about translating them, it’s about feeling them.”

Despite the Sevdah traditionalists, Božo Vrećo is always on the lookout for his style. “I want to be an original, not a copy,” he says, “and I want to free traditional music from a box.” What he has in mind is a “Sevdah Renaissance”. And the deeply sad folklore may also be danceable at times. “The lyrics always remain tragic, but the music should give hope,” he says.

Even though the concerts are always sold out, Božo Vrećo is still a challenge for the conservative society in Bosnia – with his appearance, with his lifestyle. He keeps away from the politics that rift the coexistence in the Balkans: “I don’t want to deal with this rubbish anymore. We survived the war, and I want to concentrate on the good.” The good thing is his music, and he bewares of overloaded messages: “I just want to live my life,” he says, “but when I fight for myself, I fight for everyone else. That he isn’t loved by everyone for it, he calmly accepts: “The bad people don’t like me, and that’s all right. My audience, that’s the good people.”