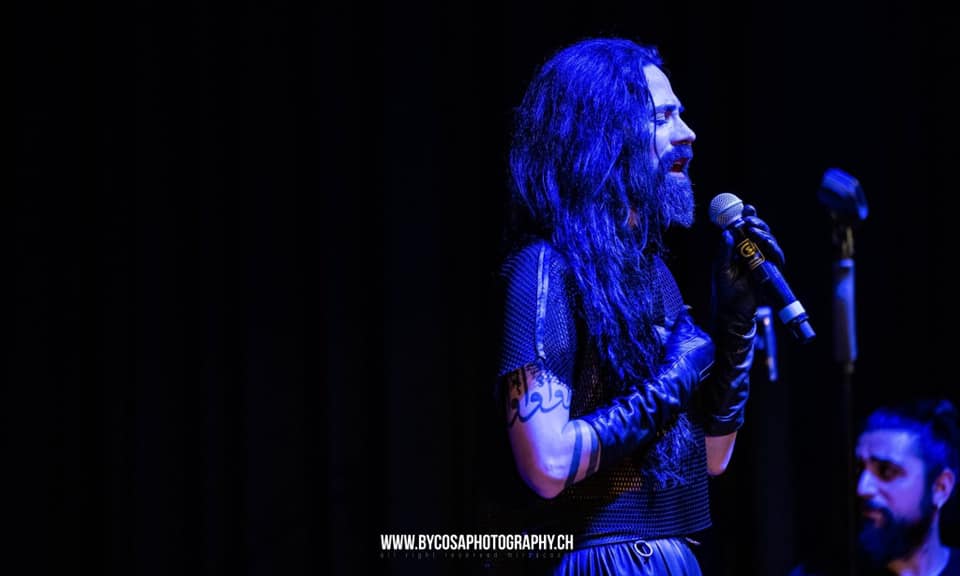 The Bosnian Bozo Vreco feels like a man and woman. And found his liberation in traditional Sevdah songs. How he explained and showed in Switzerland.

The sold-out hall in the Volkshaus Zurich is bathed in red light, the drummer strikes the beat, the audience is tense as if they wanted to get rid of the first applause as quickly as possible. A few moments later they are cheering. Bozo Vreco has entered the stage, or rather: has appeared, dancing, floating, all in black. His long pleated skirt gently follows the flowing movements, tattoos sparkle out from under the wide stitches of his net top. His bright voice fills the room, wistful, plaintive.

Meanwhile, the singer is known beyond his home country Bosnia and the Balkans, he is touring worldwide. His queer interpretation of one of the most traditional music styles of the Balkans inspires far more people than just those from the diaspora, even in Switzerland.
After a few beats he stamps the floor, the rhythm gets faster, the typical Balkan bouncing beat and the trumpet comes in, Bozo throws back his long black hair and sets off on what feels like a crazy trip for the next two and a half hours from the deepest, saddest point a soul can reach in all its pain to the point where it frees itself from everything. This is Sevdah, this is Bozo Vreco.

“Sevdah a state of mind,” says the 36-year-old with a calm, soft voice one day before the concert in a hotel in Zurich. One is like being in love and yet not with the person one loves.

Attracted to pain – and freedom

Sevdah, or Sevdalinka, is a traditional music style from Bosnia and Herzegovina that is spread throughout the Balkans. Depending on the language from which the word Sevdah is derived, it means black bile or in love, melancholy. Some songs are over 500 years old and date back to the Ottoman period. They tell of unfulfilled love, longing, desire and broken hearts – similar to the Portuguese fado with the saudade.

The melodies are marked by Arabic and European influences. In the beginning, the songs were sung without accompaniment, only later instruments were added, such as the string instrument Saz or the accordion. Today the Sevdah has come out of its interim shadowy existence under Tito. Artists like Amira Medunjanin or the band Mostar Sevdah Reunion are his new contemporary voices – and Bozo Vreco. When he sings and dances, he is in a kind of frenzy, says Bozo Vreco. Photo: Boris Müller

“It wasn’t I who found my way to this music, it was she who found me,” says Bozo, who comes from Foca and was born in former Yugoslavia. First, he studied archaeology in Belgrade. But the songs he heard on the radio from his mother as a child did not let go of him, not the sadness, not the freedom that spoke to him from them. For even if the tragedy of two lovers continues in the lyrics, the music catches it, transforms it, makes it sound like hope. He has found himself in a conservative society, full of rules, norms and pigeonholes.

Bozo sees himself as both man and woman, with all the nuances in between. He found his liberation in the lyrics of traditional songs, of all things. “Sevdah has no gender”, maybe that’s why he fell so in love with this music. Sevdah is more than many people see in it, a bird in a cage that needs to be opened so that it can fly in its own sky. One song, 100 forms. Bozo found his very own.

He sings from the perspective of men, of women, sings how he falls in love with men, on stage, he sometimes strokes the pianist’s head, sometimes the drummer’s. The first time people laugh, then they don’t. Bozo plays with the audience, switching between mischief and seriousness within seconds.

The way he sings leaves no doubt that Sevdah can tell of more than just the love between man and woman. “Bozo, I love you!” shouts a man’s voice from the back rows of the hall. Bozo throws back a kissing hand.

“No problem”, said a middle-aged man before the concert about Bozo’s identity, but a woman in her mid-20s said that such a person was unusual in Bosnia. Not everyone in her family agreed with this lifestyle, homosexuality was still a taboo. The relatives in Bosnia would still listen to his music. The young woman anyway. For her, his music sounds like a piece of home. Different cultures have met there for centuries, “he embodies that”.

Being strong for others

For Vreco himself, his music is a revolt against what is going wrong in his home country. His music tears down borders, from which many good things are born, “even in Bosnia”. He avoids questions after difficult times. There have been ups and downs. The queer life in Bosnia is tough and dangerous. You have to be strong to be an example for others. At the first Pride in Bosnia, last autumn, he was in the front row, “finally opening the doors and windows to Europe, to the world”, even if there is still a lot to do.

On stage, he beams all this away, tears the hall from its chairs without falling into snappy, kitschy folklore. His haunting voice is an invitation to sympathise, to suffer and to free oneself with him at the moment. All around the audience sings along as if it were a single body of sound. The old and new songs written by him sway back and forth.

As if in ecstasy, Bozo turns to the music like a dervish, his skirt turns with him, this time not softly but sharply like a circling plate high above the ground. The beat is faster again, arms in the air everywhere, hands clapping. The liberation he spoke of arrives in the here and now. The hall seems to dissolve, to become part of a world in which everyone is Sevdah and finds himself, like Bozo.